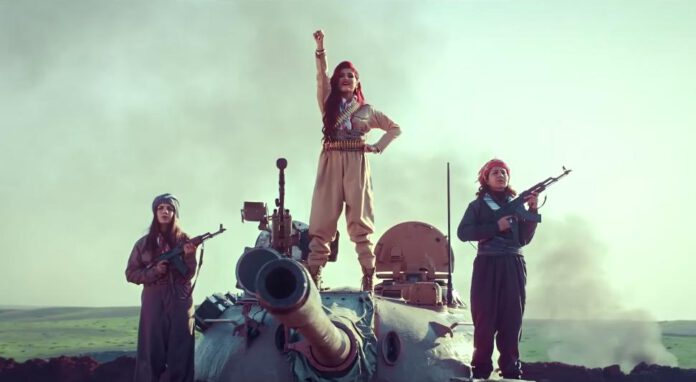 In her most recent music video, “Revolution” Helly Luv poses with a golden AK-47, stares down a tank and dances with Iraqi Kurdish forces, known as the Peshmerga. The video was filmed in Northern Iraq – only two and a half kilometers from the enemy troops of the Islamic State.

“Revolution” has more than 4.5 million views on YouTube. For her video, she was honored as one of “The Leading Global Thinkers of 2015” by the US magazine Foreign Policy. Helan Abdulla aka Helly Luv was born of Kurdish descent in the city of Urmia, West Azerbaijan, Iran. The 27-year-old Luv, which is celebrated as Kurdish Shakira, flew in 1991 after the second gulf war on Turkey to Finland and now in L.A. and Iraq. She regularly receives death threats from Islamists and even parts their own family. Nevertheless, Luv says she would rather die something she believes in rather than closing her eyes to injustice.